It is nearly a year since PicoMicroyacht crossed the English Channel. This blog is about PicoMicroYacht rounding Land's End on the 5th May 2013. The voyage was done anticlockwise, starting off from a small cove called Sennen Cover, rounding the most westerly tip of England arriving at the quintessentially picturesque St Michael's Mount. Large waves batter this coast, rolling in from across the Atlantic with no significant land mass between England and the USA and Canada. 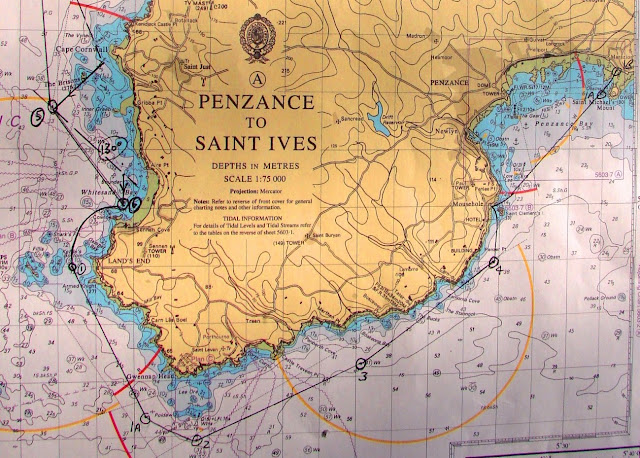 Chart showing route from Sennen Cove (just north of Land's End) to St Michael's Mount.
1 - The route took PicoMicroYacht inbetween Land's End and the Longships rocks, very close to Kettle's Rocks as semi-submerged reef that has sunk many ships. The atlantic waves are coming from the west (left) and will criss-cross any local waves. Adding to this, the loss of depth as the waves close in on the shore and the tides bifurcating as they traverse round the tip of Cornwall means there can be a very confused sea even with slight winds. 2 - It is necessary to go round the Runnel Stone buoy to avoid both a reef (The Runnel Stone) and rough water or a race off the most southerly tip of Cornwall. After that things get easier  (3-4) as the coastline gets closer you entered the more sheltered water of Penanze bay to reach St Michael's Mount. On this trip, PicoMicroYacht did not stop off at Mousehole.


The night before in the hotel overlooking Sennen Cove I could hear the surf pounding on the beach. But by the morning it had calmed down. I knew it was going to possible to do the voyage. Nevertheless, as the day wore on the wind and surf increased. 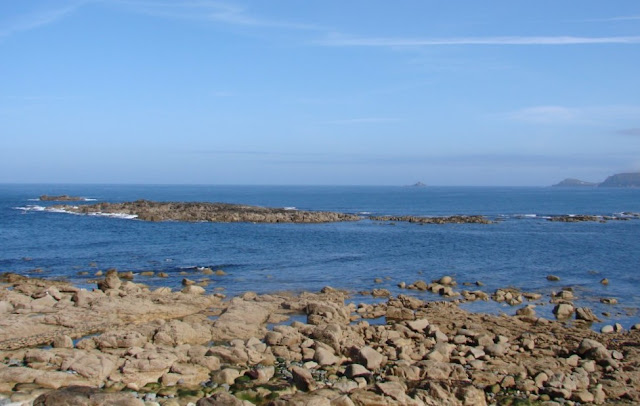 When launching PicoMicroYacht I was helped by a group of funder raisers and supporters who were running round the Cornish Coastal Path in aid of a local UK charity called CASPA which helps children with autism and their families.
I chatted to my helpers and then went down to the beach and several people helped me drag the boat off the sand into the water. We bantered.'You must be mad - I have looked at the sea and it is rough out there.' 'no it isn't.. it's quite calm really' I replied, knowing it was not. 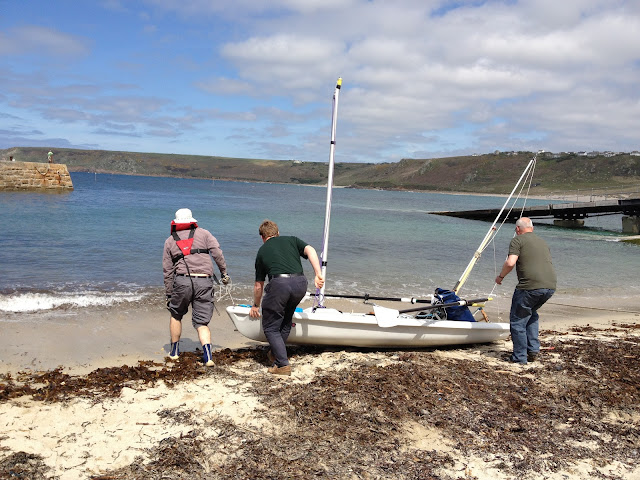 Inside the harbour it was calm and I was able to get PicoMicroYacht completely ready for the voyage.

I called up the Falmouth Coastguard on the radio. They asked whether I had a shore party. I hesitated in my reply because I thought they might not believe me if I said "well there are about 20 people running along the cliff tops looking out for me and my wife is on the mobile phone" 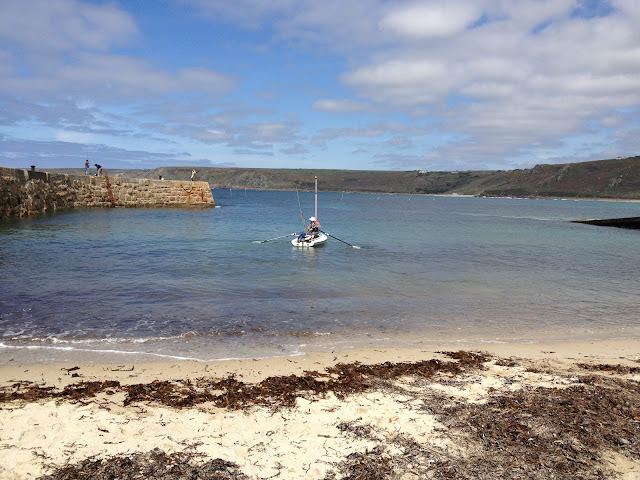 There was time to take photographs of the people seeing me off. 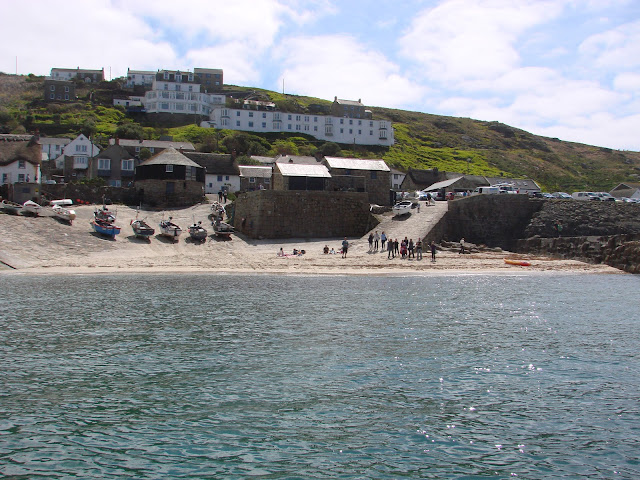 I had been studying the sea carefully and saw there was only white water where it broke against the rocks. There was a commotion but not enough to upset PicoMicroYacht.


Quickly I was off, rowing down the Tribbens, a narrow channel between some rocks and the shore, feeling my way along trying to find the right line to avoid the worse of the turbulence. I had chosen the best time to use the channel, high tide. 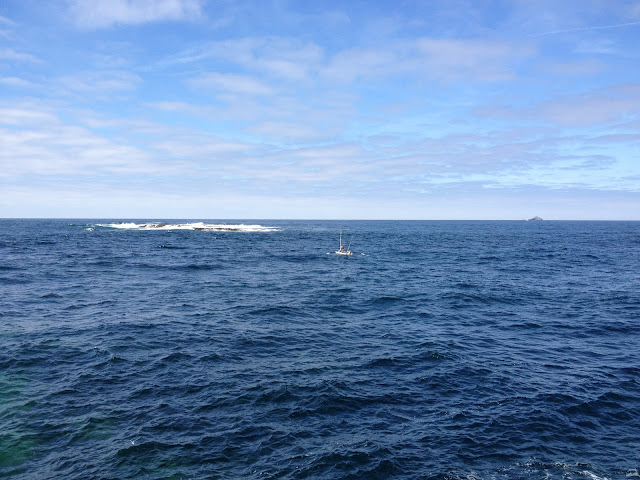 PicoMicroYacht was pushed upwards by the oncoming waves and bouncing down the other side, but no water broke over the boat and I felt in control.


As I pulled away from the land the waves became considerably larger, with smaller cross waves, but I was struck by how little wind there was given the commotion of the sea.
I was looking to position myself between the Longships lighthouse and the shore, enough out to sea to avoid any overfalls but trying to avoid two treacherous rocks, known as Kettle's Bottom. Everything was going to plan, and I moved forward gingerly looking out for rough patches. 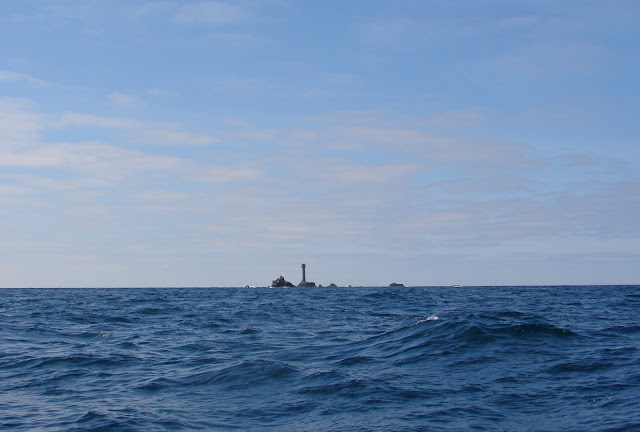 Longships Lighthouse
As I neared Land's End I could see the gothic like architecture of the cliffs with houses perched on the top. The people sending me off had disappeared from view. I had to force myself to stop and take some photographs because the temptation was to keep moving forwards. 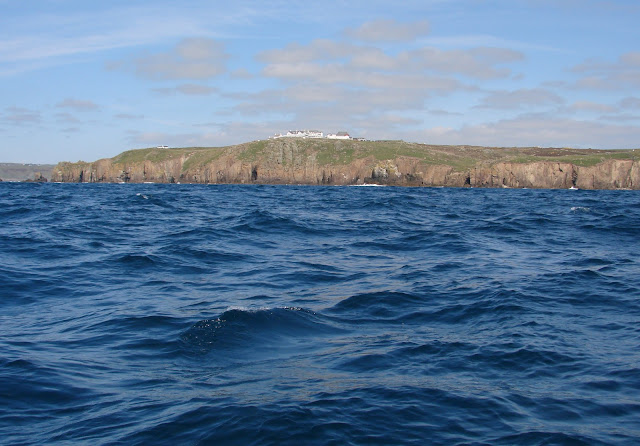 
I became aware of the noise of a ship and looked round to see a large catamaran motoring towards me with sails up. I altered course to signal I was manoeuvring out of the way, following collision regulations. But the catamaran kept alterning course as if not seeing me. So I turned 90 degrees and rowed hard to make sure I was clear and in doing so I was seen. 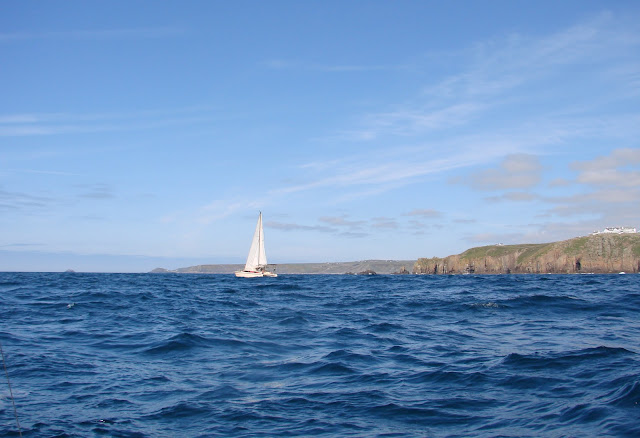 The catamaran heading off past Land's End on the right with Cape Cornwall in the distance,


I headed the for the Runnel Stone buoy, which marks the passage avoiding a hazardous rock pinacle off Gwennap Head. As I drew near I heard a bell clanging and a moaning noise. The buoy is fitted with a bell that sounds with wave movement and also with a whistle set in a tube, which makes the moaning noise whenever there is a good swell. The doleful atmosphere it created contrasted with the bright blue sky. 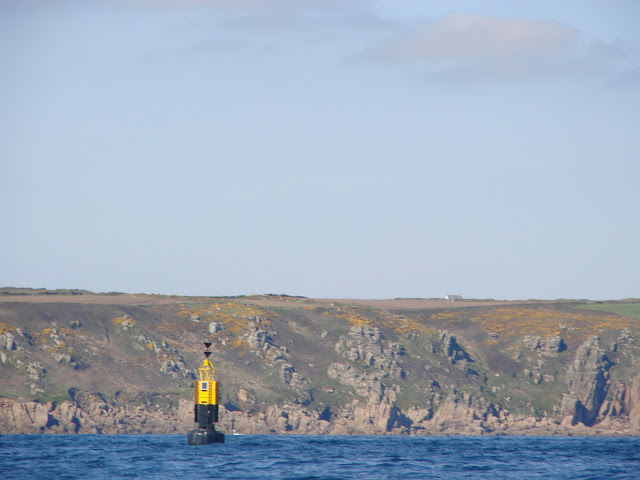 Soon I could just see the Minack Theatre and the two beaches of Porthcurno. At this point I was 1.5 miles out and the shore party could just see me, my rowing blades catching the sun and flickering.
The sea became calmer and the wind dropped off near to nothing and I was joined by two small fishing boats, one of which seemed to keep station about 100 metres away but then continued fishing.


Eventually PicoMicoYacht was rounding the headland into Mounts Bay and St Michael's Mount could be seen in the distance. Mousehole was on the left and I was reeling in the miles. 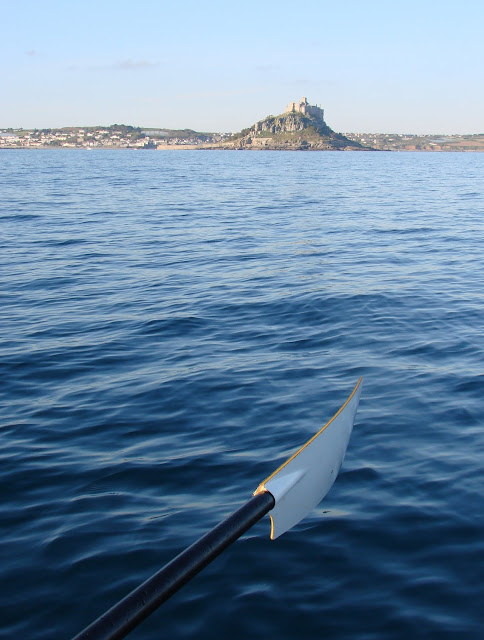 I arrived on the hard sandy beach at Marazion be met by two friends who helped me take the boat out of the water. 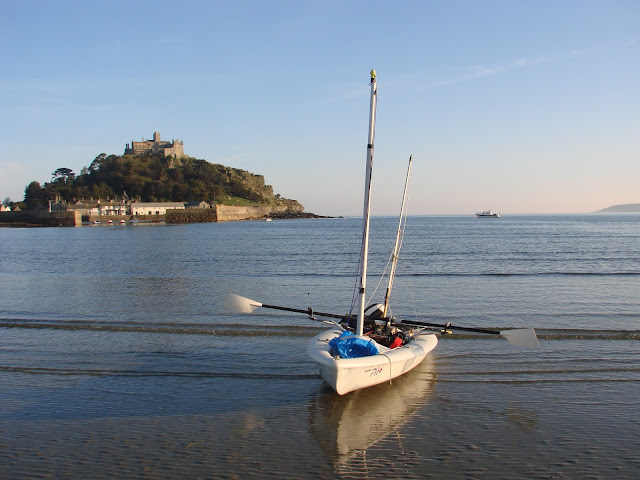 I checked the distance - it was 19 nautical miles and had taken five hours.