It was PicoMicroYacht's first voyage after lock-down.


The UK Government had published guidelines about recreational water sports as follows:

‘All forms of water sports practised on open waterways, including sailing, windsurfing, canoeing, rowing, kayaking, surfing, paddle-boarding and the use of privately-owned motorised craft (in line with the guidance issued by the relevant navigation authority) are allowed.’

The Government also allowed for travel to get to the relevant places for such sports.

Although some common sense and caution was required, I realised this meant that I could finally launch PicoMicroYacht. I decided to go to my sailing club, which had provided guidelines for visiting the club.

In addition, my own rules were:

(1) Not going in the club house at all
(2) Using disposable gloves when I unlocked the gate to enter the club and gain access to the slipway.
(3) Not to touch anything other than PicoMicroYacht (I broke this rule when I rescued a good piece of wood from a bonfire).

I brought with me all food and drink and left nothing.

When I arrived, I chatted briefly with two other sailors, keeping a good distance. They seemed happy to be able to visit the club and do some work on their boats.

The plan for PicoMicroYacht was to circumnavigate Hayling Island, part of the coastal waterways between Portsmouth and Chichester, areas of outstanding beauty. 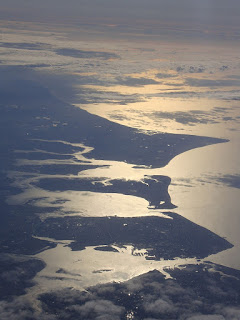 Hayling Island is the rotated T-shaped island in the middle

The sea state was smooth or slight, and to start with there was no wind. There was a gentle neap tide and warm weather.

PicoMicroYacht left the Chichester Harbour at about three and a half hours after high tide. Normally I would not leave on the ebb, but the sea was calm. 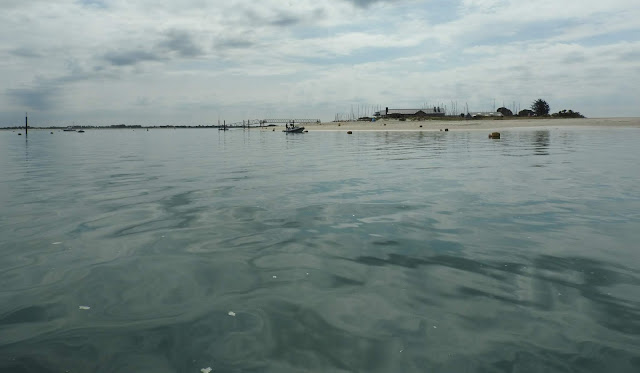 The glassy sea by the entrance inspired confidence

As I headed out, I realised the harbour entrance was being patrolled by the harbour master, presumably checking that people were following the regulations.

The harbour master crew swept by in their rib

I also cut a corner and headed west almost immediately outside the entrance, going across the West Pole Sands. Normally this would only be done at high tide, if at all, because of the danger of breaking seas and grounding. I proceeded very cautiously. 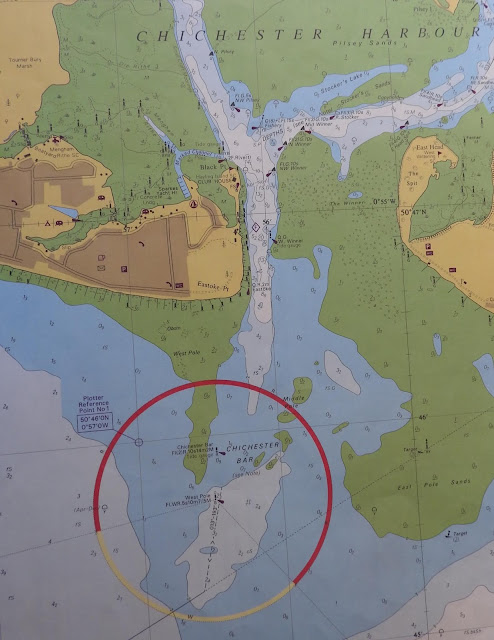 I then rowed clockwise west, close to the Hayling Island shore, watching people relaxing on the beach. 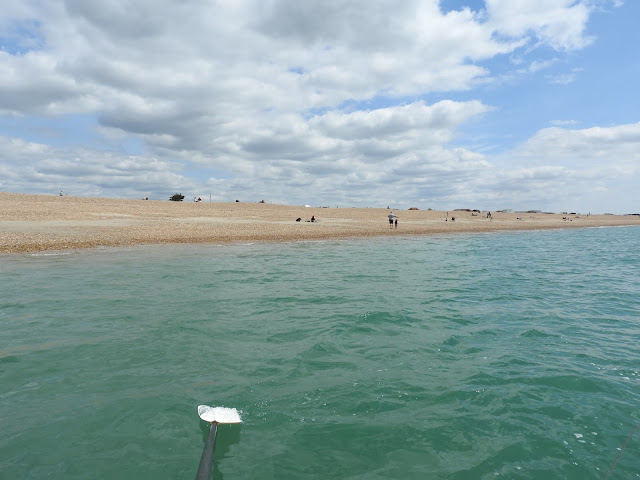 The wind started filling in from the west. However, I was now shielded by a large sandbank outside Langstone Harbour called the East Winner. 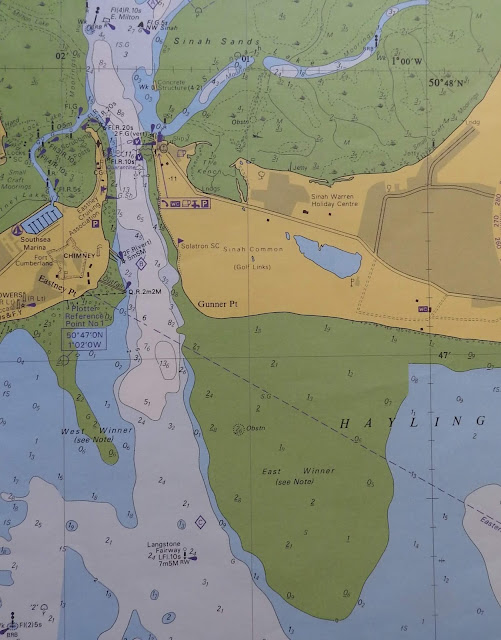 The East Winner shown to the right of the Langstone entrance

Looking south across the East Winner towards the Isle of Wight

I was able find a way across the sandbank, the depth being slightly greater closer to the shore. 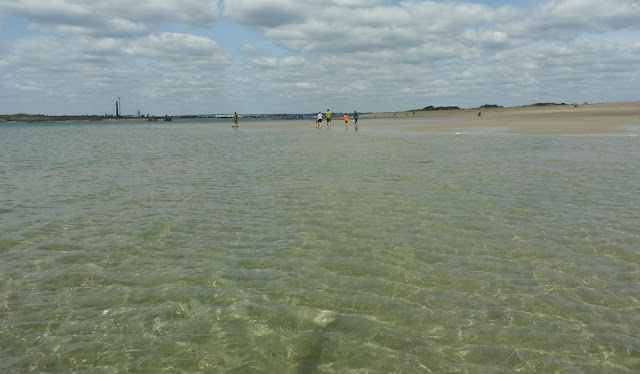 I then entered Langstone Harbour, with the ebb tide now slackening.

I moored up and napped for a while, and then headed up the harbour, the wind strengthening all the time.

It was not long before I reached the channel that runs north of Hayling island. 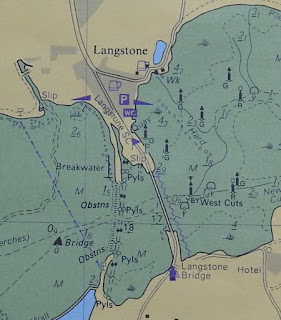 The chart shows the channel separating Hayling Island from the mainland, the remains of a railway bridge to the left and a road bridge to the right

The first main feature was the dilapidated railway bridge, originally built in 1864. 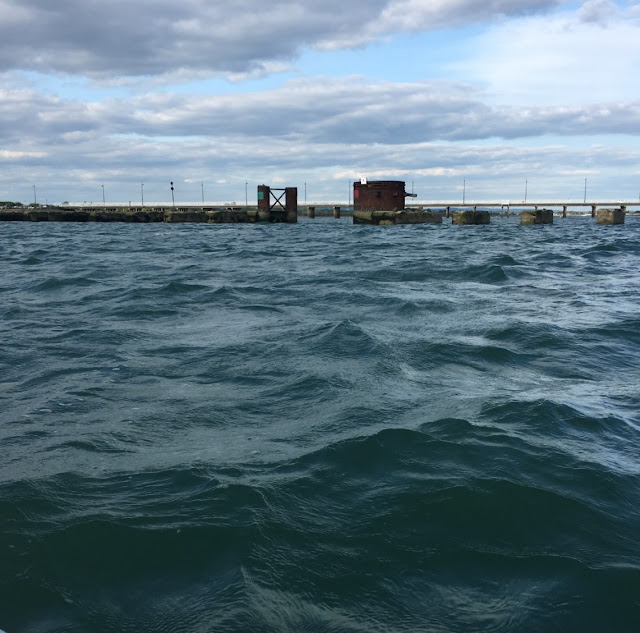 As I got closer, the waves started to pile up and I had to be quite careful to aim though the gap, passing the large structure that supported the rotating bridge. 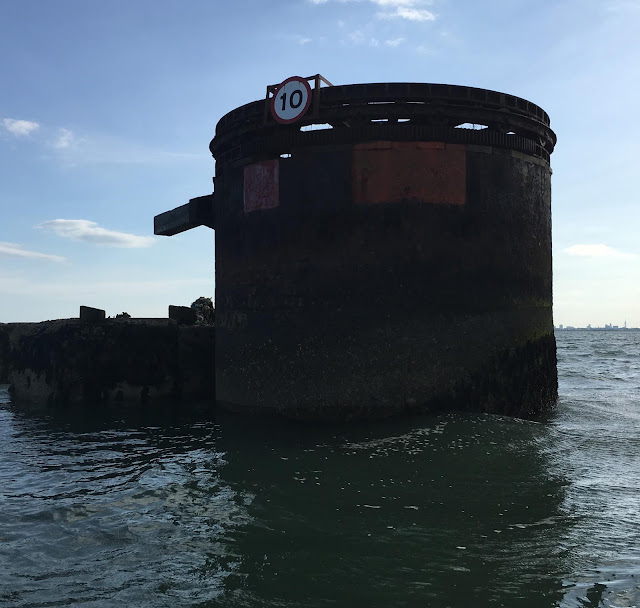 The water quickly calmed and I next passed under the road bridge, with six inches to spare for my mast. 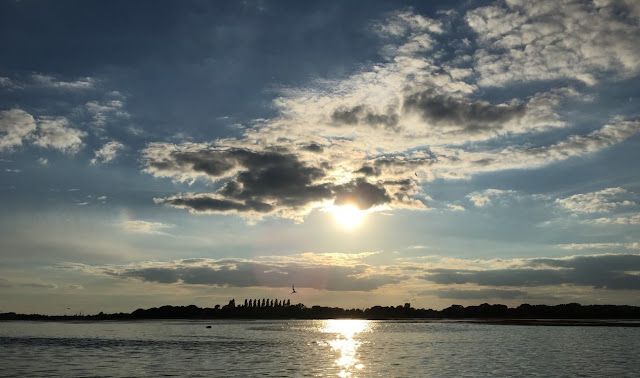 It was nearly high tide  and as the sun started to set as I turned south towards the Chichester Harbour Entrance, back to my sailing club.

Including some detours, the total distance had been 19 miles, a pleasant and memorable voyage.


Posted by PicoMicroYacht at 18:26 No comments: Links to this post

This post links to a short video about the PicoMicroYacht lifejacket.


I tend not to wear a lifejacket if rowing on rivers. On estuaries I wear one unless it is very calm. At sea I almost always wear it. I have not yet fallen in or capsized PicoMicroYacht, although I did capsize when sailing the fully rigged Pico in 2012.
Posted by PicoMicroYacht at 20:57 No comments: Links to this post

I have made a short video of the safety devices used on PicoMicroYacht, including navigation aids. This excludes the radio, automatic identification system and depth finder, mentioned in the recent post 'PicoMicroYacht's Shortest Voyage.'


Posted by PicoMicroYacht at 21:30 No comments: Links to this post

Living on Board the PicoMicroYacht

I have slept on the PicoMicroYacht three times.

I used an existing tent, a purpose made boom tent not so suitable for PicoMicroYacht. For a bed-board I used the dagger plate, which worked better than might be expected.

Putting up the tent required being off the boat, and on each occasion I assembled it from a marina pontoon.

The lock-down is giving me plenty of time to think, and I realised I could adopt a more flexible system if I used a bivy tent, which would enable me to assemble it whilst being on the boat.

I chose the Snugpak Stratosphere tent, which is reasonably priced and well designed. It has two small poles at the head end, which keeps the tent fabric off your head, an important luxury. A ‘side entry’ makes it possible to get into it whilst on the PicoMicroYacht.

I also made some light wooden boards that are supported by  the rowing frame and provide a deck for the tent.

The video above shows me trying it out in my garden. When making the video it felt eerily quiet, deserted - the Stones have released a new single expressing this thought, called 'Living in a Ghost Town,' the best they have done in ages. But I have found friends around me are creating a virtual town instead.

Posted by PicoMicroYacht at 20:08 No comments: Links to this post

I am locked down and landlocked. I have managed, however, to slide PicoMicroYacht through the garden gate and assemble the rig for my 'Shortest Voyage' (see the video below). But the pull of the sea remains. 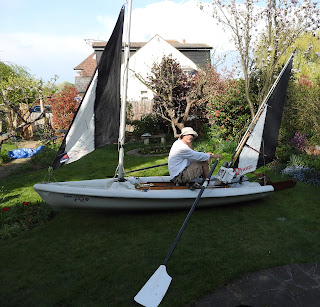 I must go down to the seas again, for the call of the running tide
Is a wild call and a clear call that may not be denied;
And all I ask is a windy day with the white clouds flying,
And the flung spray and the blown spume, and the sea-gulls crying.

Posted by PicoMicroYacht at 14:54 No comments: Links to this post

On returning to the sea

It is not too far-fetched to think that one of the greatest 20th Century adventure writers is Adlard Coles. He wrote books describing his voyages on the South Coast of England and beyond, noting the simple pleasures of yachting in a small boat. His voyages were mostly unexciting, but his detailed writing captures the essence of such sailing in a way unsurpassed by others. 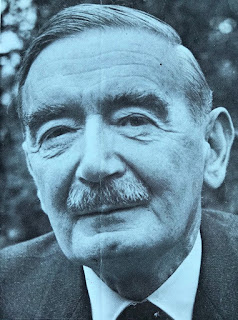 His classic book ‘Sailing Days’ evokes carefree days of exploration in the 1930s. 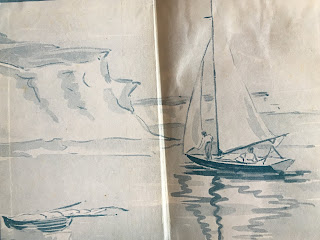 A follow up book, ‘More Sailing Days,’ was written at the end of the Second World War. 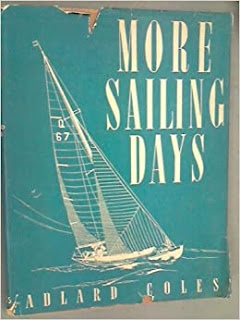 At the start of the book he describes how he sailed his 22 foot yacht called Zara from Itchenor to Wooton Creek on the day war ceased in Europe. 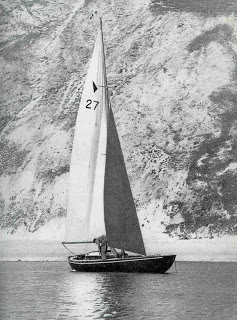 His sense of gratitude is as follows:

‘I had bought the yacht in 1944 when, like multitudes of others, I was longing for the time when I could get afloat again. And so you will understand that it was a great moment in my life when a year later these fancies grew into a reality and I found myself making the journey down to the sea and to the little ship from which I had been separated.’

Adlard Coles 'on board'

PicoMicroYacht will launch again as soon as it is possible and of course also my small yacht, Lady Elizabeth. 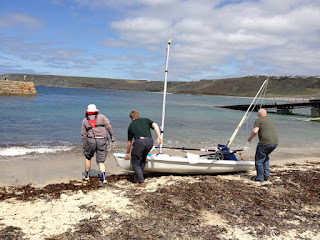 Posted by PicoMicroYacht at 14:38 No comments: Links to this post

Cold and windy weather has limited PicoMicroYacht's voyaging recently, but I was able to visit Chichester Harbour and a favourite spot, East Head. 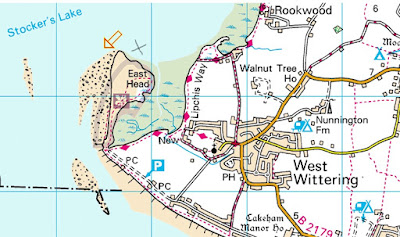 This sand dune promontory is a great place to beach a boat. Due to the inclement weather, it was fairly deserted.

It was too cold to hang out on the beach, so I went for a walk.

I had to calculate the tides carefully, to be able to get back to the boat before PicoMicroYacht floated again. It could not be easily dragged up and down the foreshore due to the damp sand.

PicoMicroYacht was beached about four hours after high tide. With approximately six and a half hours between high tides, I had just over four hours until the boat would float again.

To be cautious I attached it to an anchor borrowed from my larger boat, using a long warp.


I then did the boot trick. I learned this trick from Dylan Winter. If you leave a boat in such circumstances and do not want people to meddle with it, then leave a pair of boots by the anchor. His view is that it has the effect of making people think you just about to return. Of course, they could walk off with the boots, but I think that unlikely!

Three hours later, I returned and lay on the shingle upper foreshore, watching the sea and the sky.

The tide came in and PicoMicroYacht was readied. 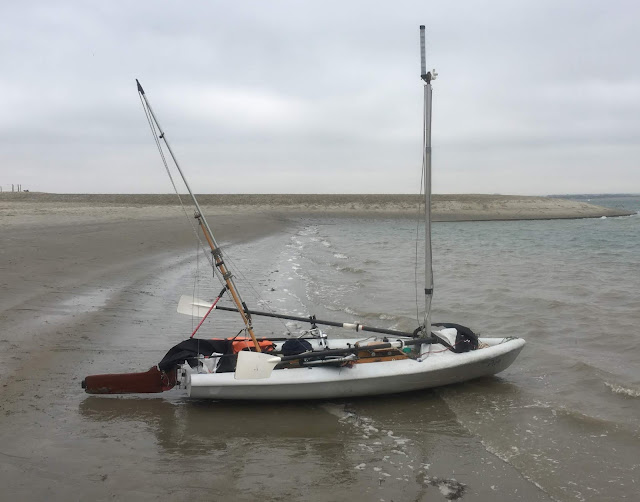 
Posted by PicoMicroYacht at 12:08 No comments: Links to this post